This grazing incidence x-ray technique excites elemental contamination on the surface of a wafer.

The approximately 50A penetration depth of primary X-rays in the TXRF method allows measurements to be made with substantially lower background intensity. This results in higher sensitivity for the elements on a flat, preferably mirror-finish surface, such as silicon wafers or the thin film surface on silicon wafers.

When X-rays collide with a sample at a sufficiently small incident angle, they are totally reflected at the surface.

As the incident angle between the X-rays and sample surface is decreased, the X-ray direction in the sample moves nearer to the plane of the sample surface, because the X-ray refractive index is slightly lower than 1. The angle where the incident X-ray cannot enter the object, and all rays are reflected, is called the critical angle for total X-ray reflection.

When the angle incidence is smaller than the critical angle ϕ, more than 90% of X-rays are reflected. The percentage of reflection depends on surface roughness. The 1/e depth of refracted X-ray penetration is about 50A.

The critical angle is calculated as below : 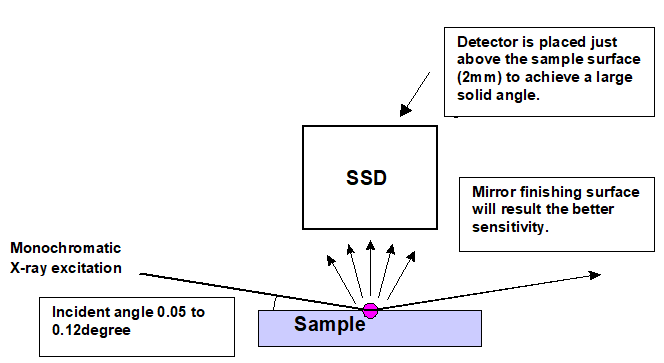 In TXRF analysis, a monochromatic X-ray beam irradiates a mirror finished-sample such as a Si wafer with incident angle set to 0.05 to 0.12 degrees. The incident X-rays are totally reflected, and scattered X-rays (which cause the background of a measurement) are minimized. As a result, the intensities of fluorescent X-rays arising from surface contaminant elements are enhanced, thus improving signal to background ratios (S/B).

The double excitation by primary and reflected X-rays, combined with the lower background, results in superior sensitivity for trace impurities adhering to the mirror-finish sample surface.

When an accelerated electron is involved in a collision (or a sudden stop) with a target, the electron emits part of its energy in the form of an X-ray. A few 10’s of kV electron acceleration voltage is required in XRF.

Fluorescence analysis to excite the inner shell electron of atoms in a sample. An X-ray tube is fundamentally a two-electrode vacuum tube. One electrode is a filament (cathode) to generate electrons which are accelerated by the applied voltage, and the other is a target (anode) to which the accelerated electrons are directed and with which they ultimately collide.

To produce monochromatic X-rays, a synthetic multi-layer crystal is used because of its excellent reflection (more than 70 % expected).

An electron emits its energy in the form of X-rays (electromagnetic energy) when it collides with a target. The electron is subjected to repeated collisions and energy is lost at each step, generating X-rays over a continuous range of energies (or wavelengths), commonly known as an X-ray continuum. In contrast, when the incident electron excites an atom of the target element, a characteristic X-ray is emitted. The energy of the characteristic X-ray is the same as that of the fluorescent X-ray. The X-ray spectrum from an X-ray tube has the following energy distribution:

A Silicon Drifted Detector (SDD) is an X-ray detector which utilizes the ionization effect of Silicon crystal by X-rays. An electron-hole (electric charge) pair is created when an X-ray photon goes into the Si crystal. The number of ionic pairs is calculated by the following formula:

The total electric charge (q) will be:

When high voltage (several hundred volts) is applied to the electrode on the Si crystal, electric charge generated is collected to the electrode. As shown by formulas (1) and (2), the total electric charge collected to the electrode is proportional to the energy of X-ray photon. The electric charge integrated is converted into a voltage pulse and its height is also proportional to the energy of the X-ray photon. Pulse height is converted into digital value by means of analog-digital conversion electronics. A multi-channel analyzer (MCA) adds one count to the channel corresponding with the digital value. The above process is repeated for each X-ray photon, and then a spectra chart is created of the number of counts stored in the channel No. corresponding with the digital value versus energy covering whole energy range.

The crystal of the SDD and transistors of the preamplifier are refrigerated at around－40°C with a Peltier device to remove thermal noise.

Computer analysis of the stored energy spectrum is employed to locate and identify spectral lines (peaks) corresponding to elements in the measured sample. Known intensity ratios for major and minor lines of each identified element are used to resolve less intense peaks, which are overlapped and obscured by adjacent strong peaks.

The following table shows typical elements and their fluorescent X-ray energies. An energy table covering all elements is available in the TXRF-V310 analytical software.

Spectral peak search and peak identification are performed automatically in TXRF Routine Analysis and Auto Analysis modes while they can be applied manually in Manual Measurement/Data Processing mode.

A spectrum chart reported by Automatic Analysis is shown below. 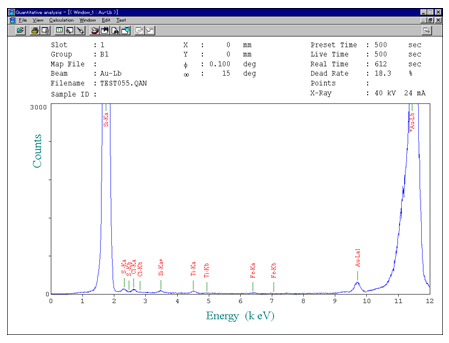 Concentration (Quantitative analysis result, atoms/cm2) is calculated using a calibration curve based on the relationship between the intensity of fluorescent X-rays and the chemically analyzed concentrations of standard samples.

In XRF analysis, the “Fundamental Parameter” data correction method is often applied to correct for absorption and enhancement (secondary excitation) effects on a measured fluorescent X-ray intensity by variable concentrations of elements in the sample matrix. These so-called “matrix effects” are absent in TXRF owing to the thinness of the analyzed contaminant layer on the sample surface. In effect, the analyzed layer is “infinitely thin” and hence there is a simple linear relationship between fluorescent X-ray intensity and the concentration of an element in the analyzed layer. Furthermore, the sensitivity ratio of each element can be calculated by the FP method, which enables the analyst to apply the calibration curve for one element to the analysis of another.

For example, the calibration curve for Ni contamination on Si wafer can be applied to all other elements detected in the spectrum by using relative sensitivity factors 2). 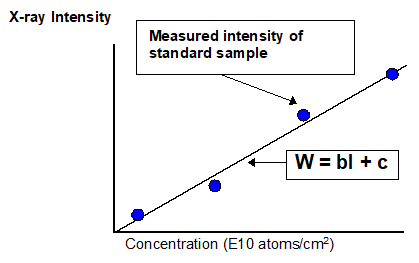 The instrument is usually pre-calibrated before shipment from the factory. The calibration curves are based on the standard samples supplied by Rigaku with the equipment. These can be renewed by the user as required, or supplemented by additional standards. A new calibration for any element is easily added to the system.

Notes : 1) The X-ray intensity determined from the integrated ±2s area of an observed peak.

2) Factors for each element’s sensitivity ratio to Ni are available in the TXRF software. To determine any quantitative value for elements other than Ni, determine the analytical curve constant by multiplying the relative sensitivity factor of the relevant element (i) by the calibration curve constant (slope) for Ni i.e. ki x bNi in equation (3).

The VPD (Vapor Phase Decomposition) method is one of the wafer pretreatment methods for TXRF measurement. The hydrofluoric acid droplet recovers small amount of metal contamination on the very surface of the wafer. By applying the VPD method to a total reflection X-ray fluorescence spectrometer (TXRF), metal contaminants all over a wafer surface can be condensed and collected to one point and the sensitivity of analysis can be improved by approximately two orders of magnitude. In the ordinary TXRF, lower limits of detection for transition metals such as Fe, Ni, Cu and Zn are 109 atoms/cm2 or so. In the VPD-TXRF, which applies the VPD method to the pretreatment, those lower limits of detection are improved to approximately 107 atoms/cm2 and the management of contaminants at 108 atoms/cm2 or so is possible.

In case of the VPD-TXRF, a spectrometer can handle the contamination level of 1010 atoms/cm2 or less. 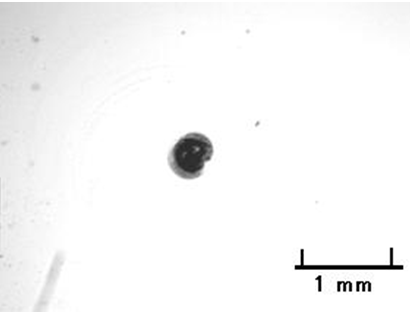 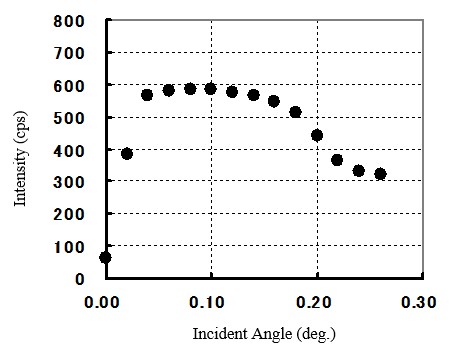 2. Recovery solution is dripped on the wafer surface from which the oxide film has been removed.

3. The recovery solution held in a nozzle scans the wafer surface to its center while collecting contaminants.

4. After the scanning, the drop is dried using a halogen lamp. 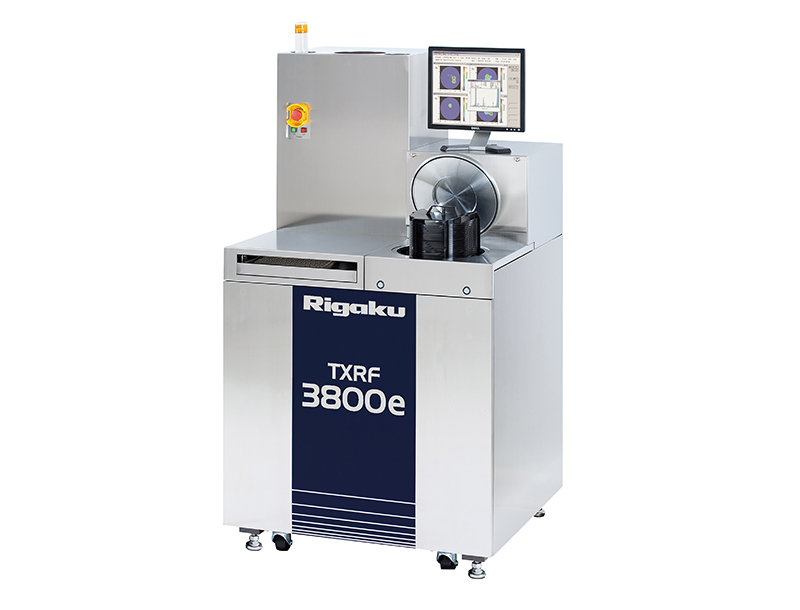 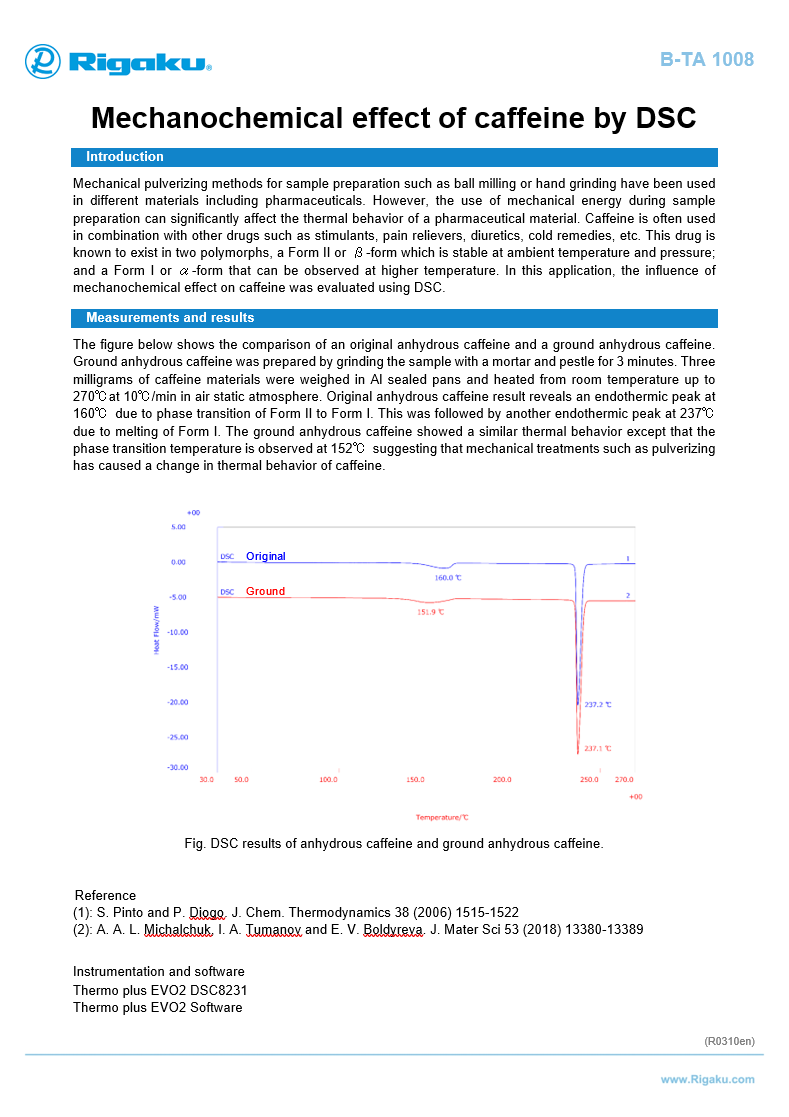 Mechanochemical effect of caffeine by DSC 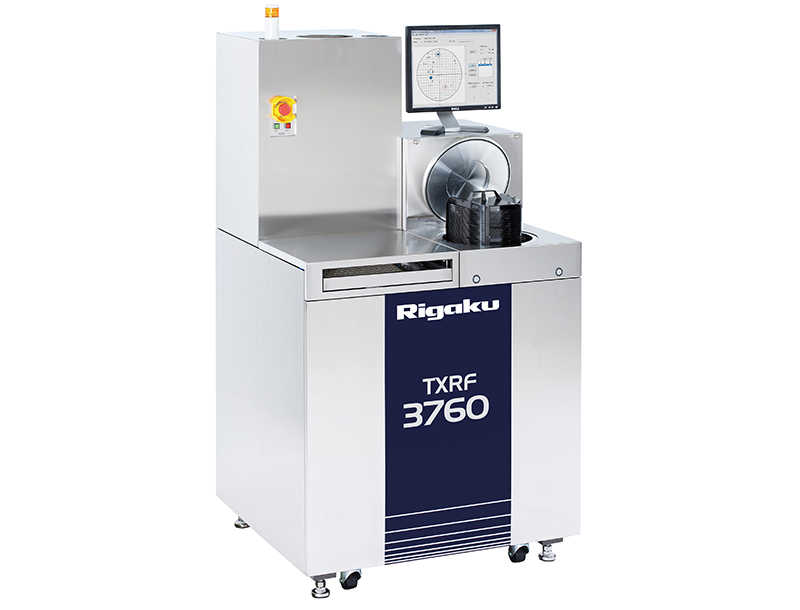 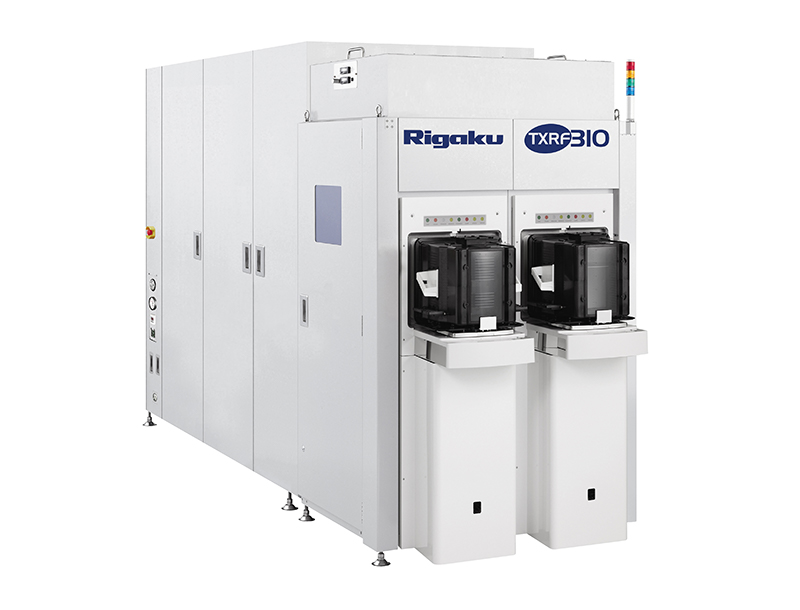 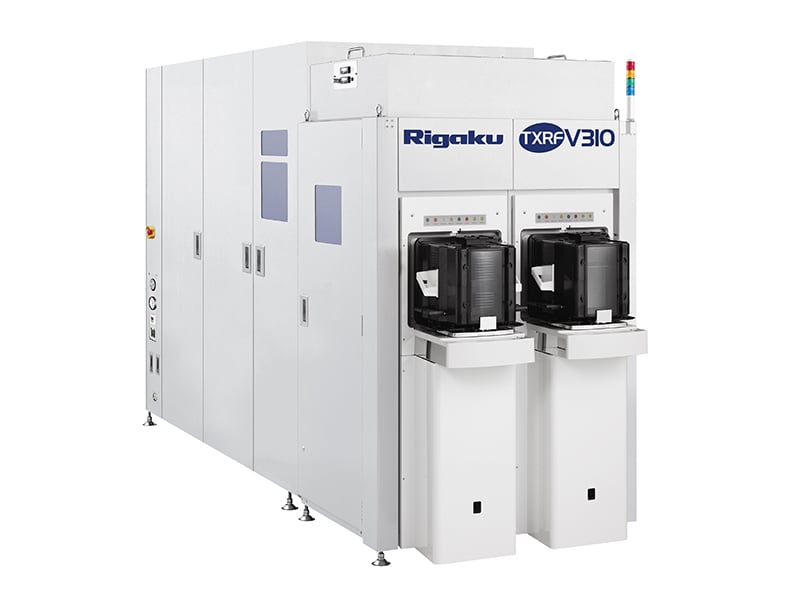 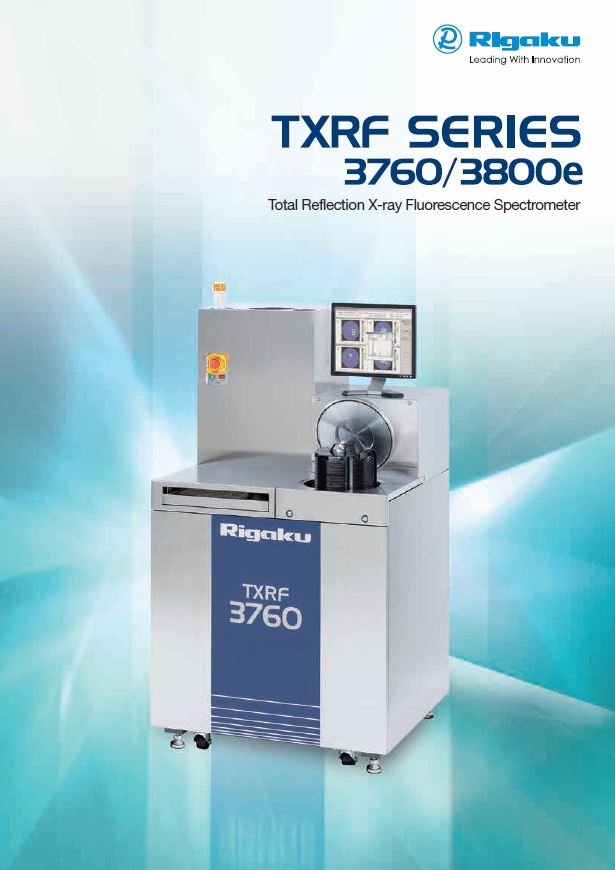 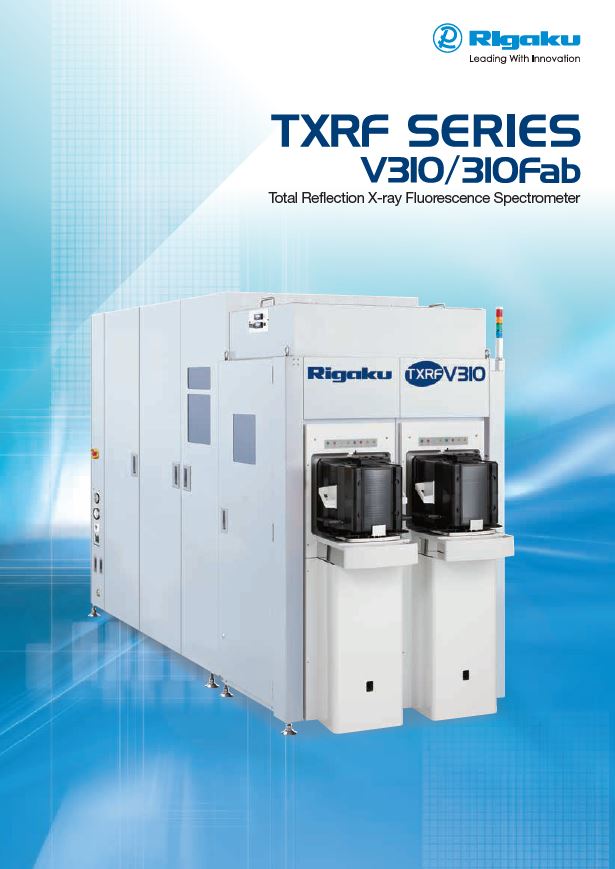 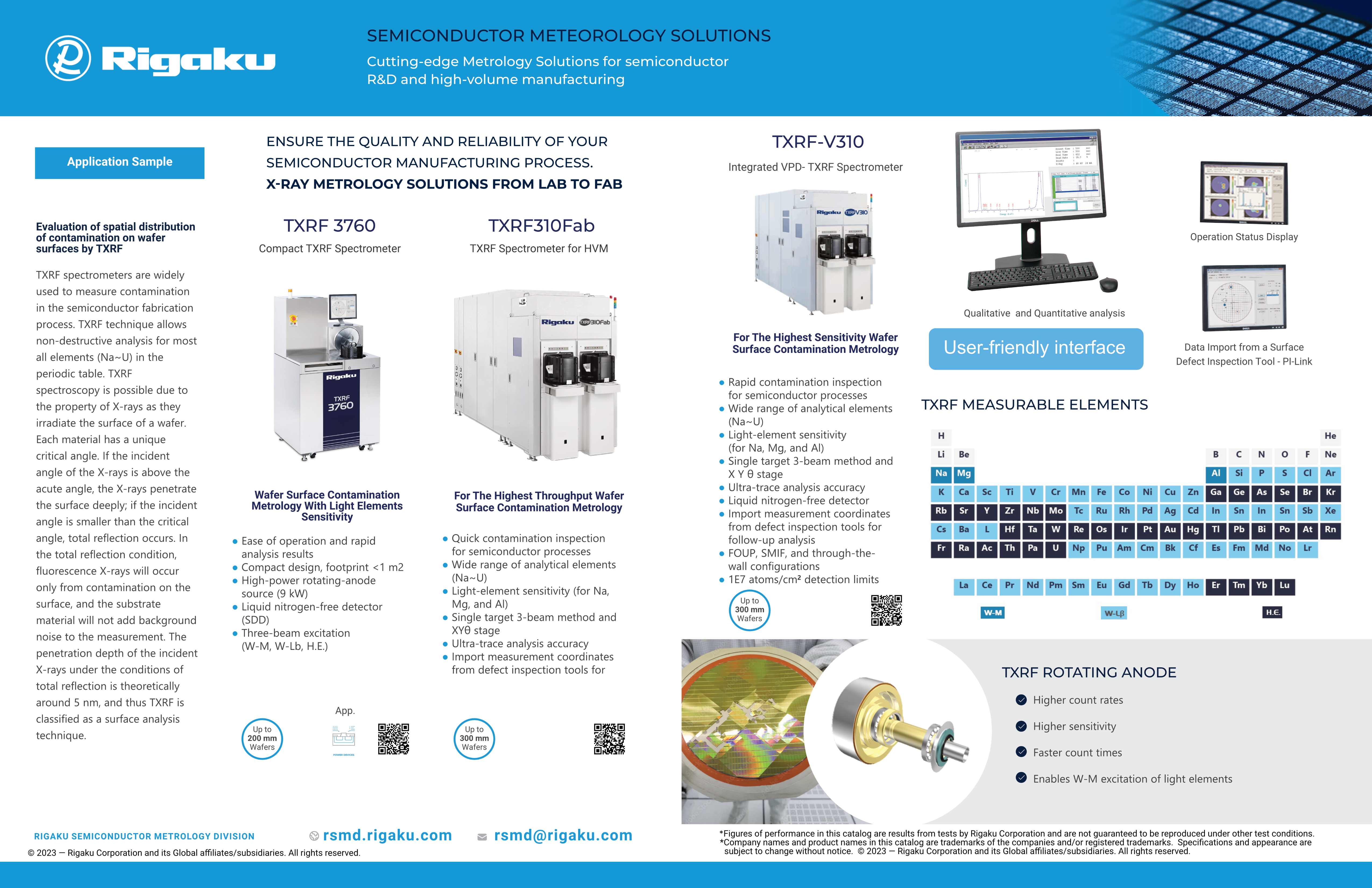 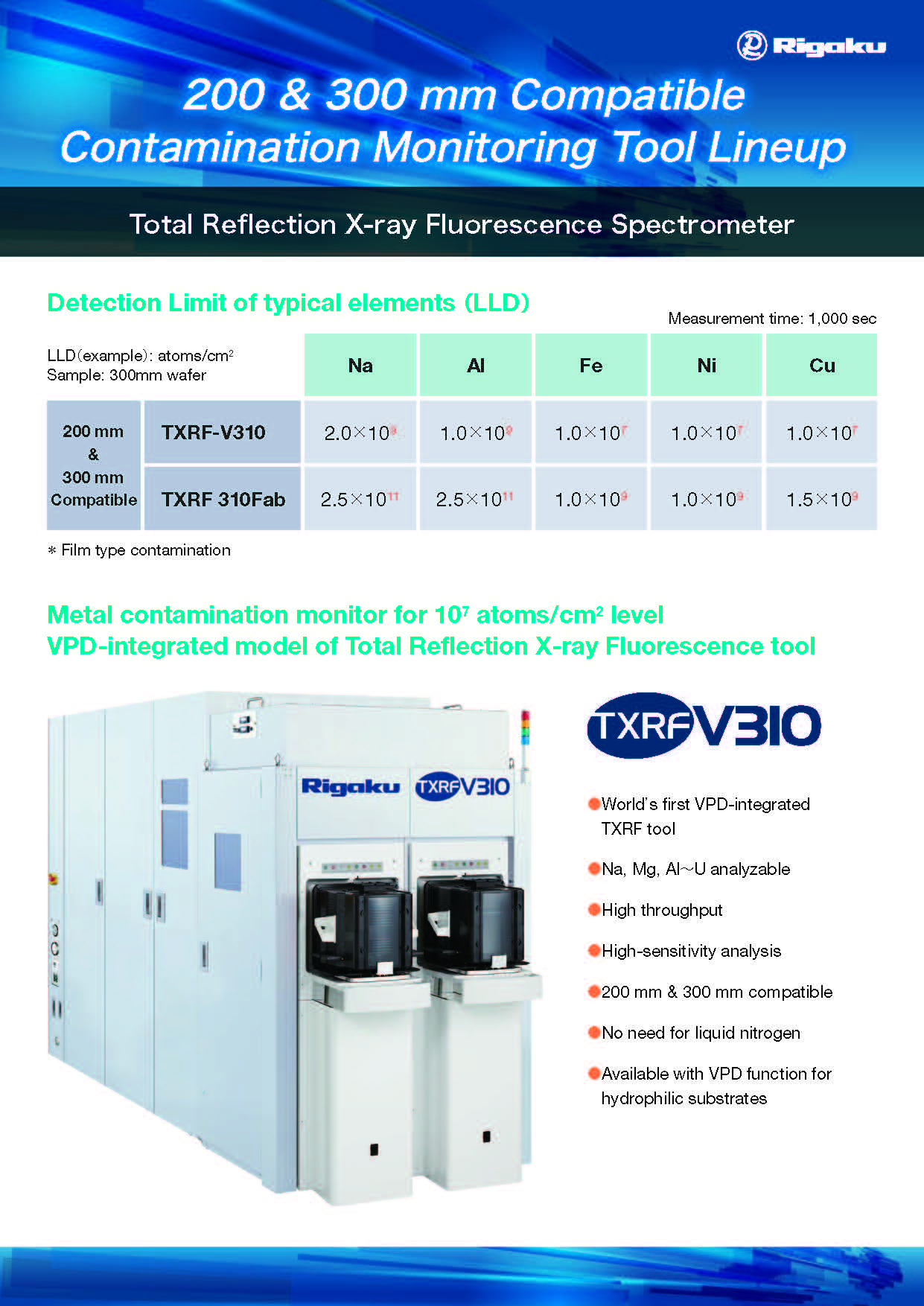 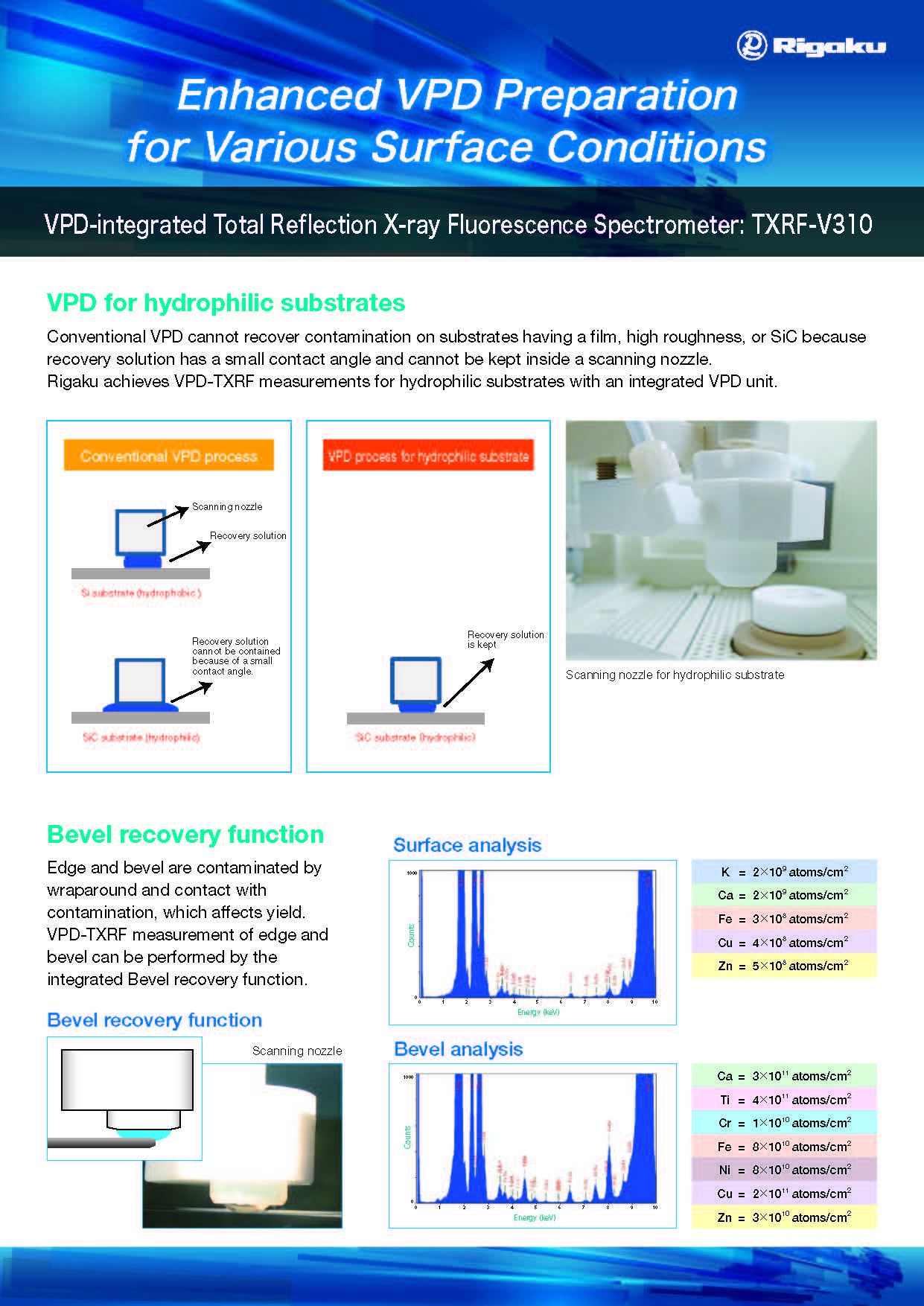 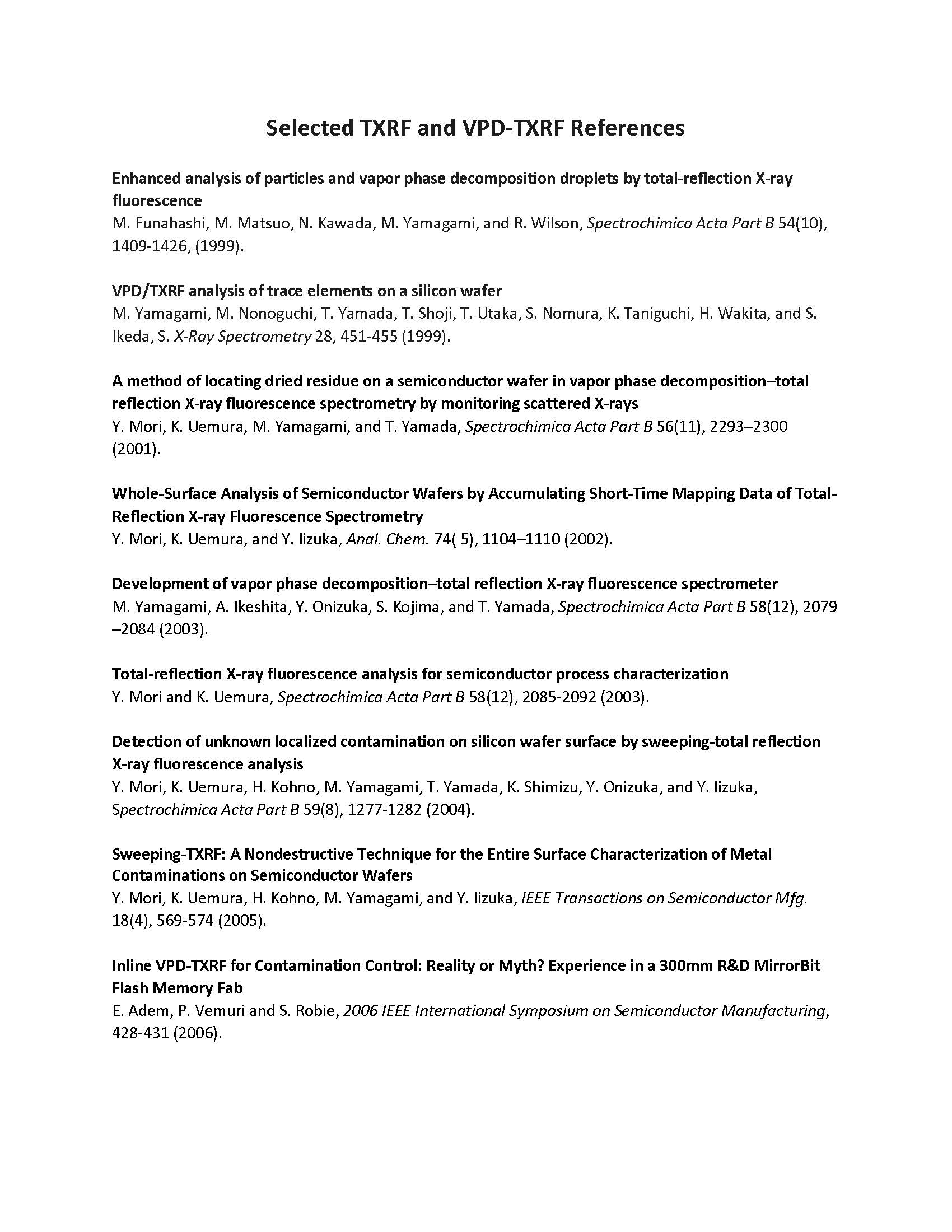 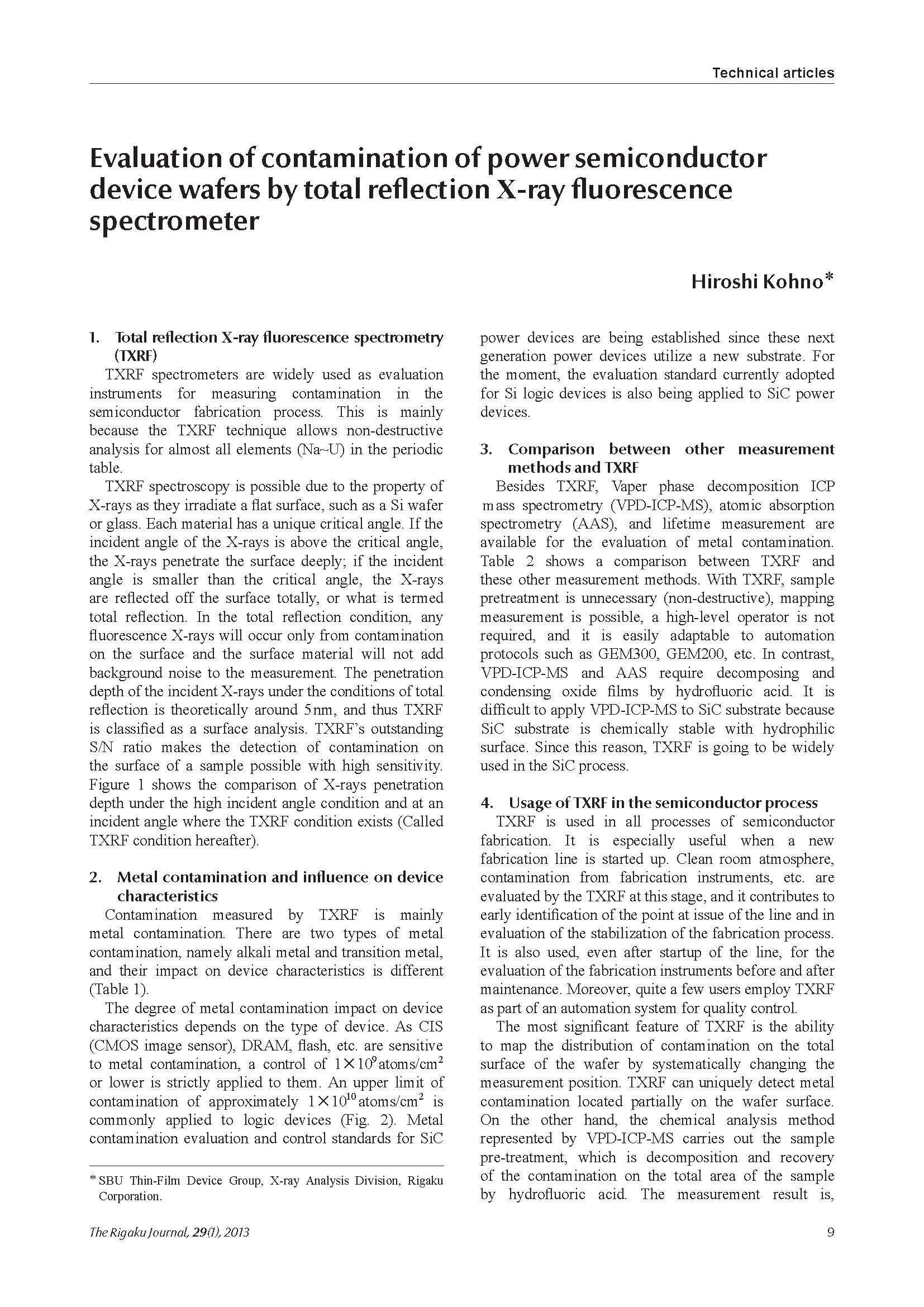 Evaluation of Contamination of Power Semiconductor Device Wafers by TXRF 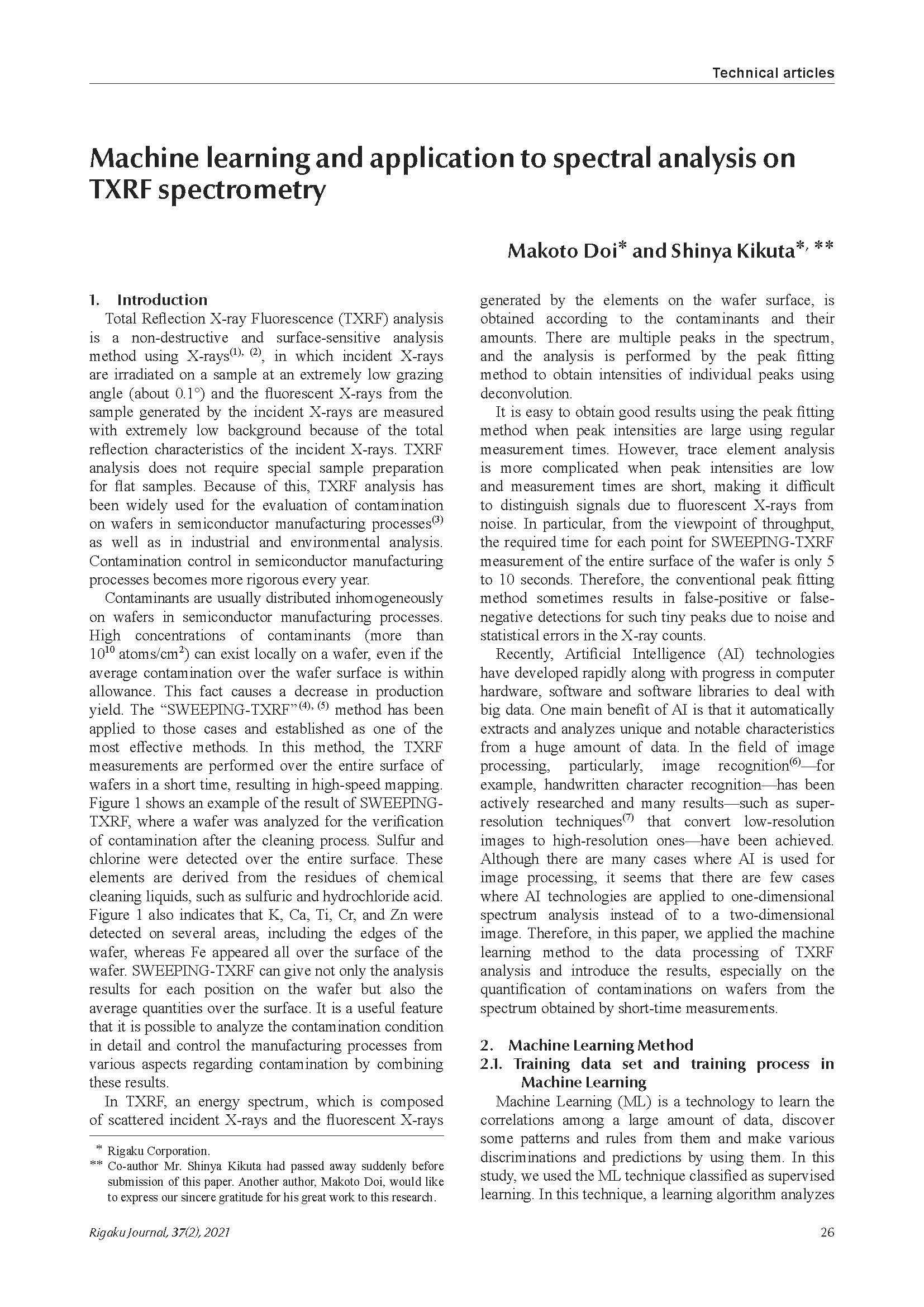 Machine Learning and Application to Spectral Analysis on TXRF Spectrometry 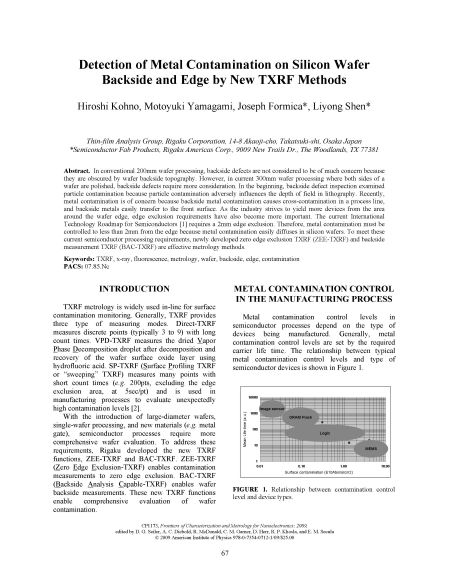 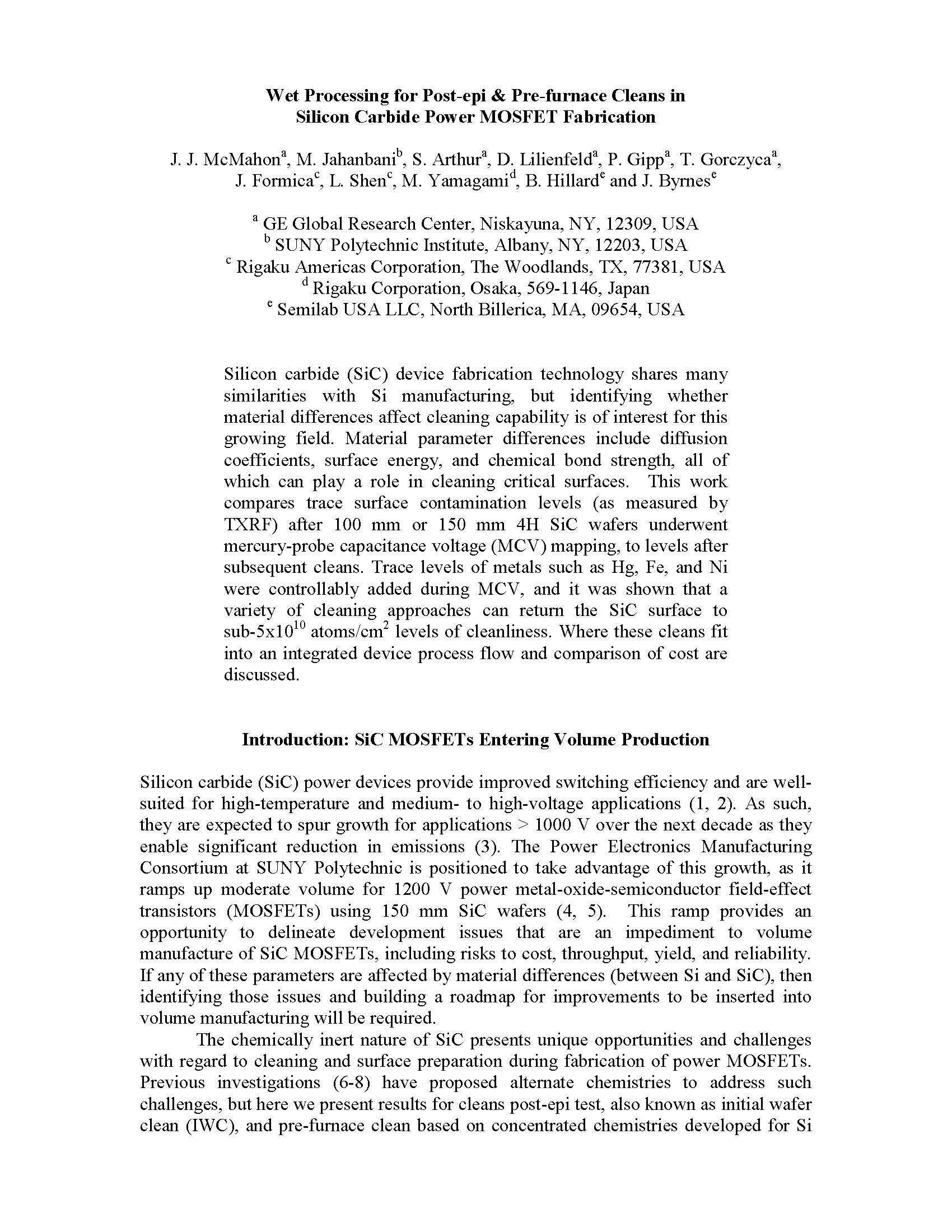